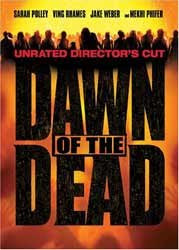 Ok, I am a geek. You probably knew someone like me in high school, who played a lot of Advanced Dungeons & Dragons, Gurps and Vampire, some one who watches way too much Sci Fi Channel and has the entire Aliens Quadrilogy. Still, I have a plan...
In the horrible event that the dead should emerge from the grave, my meeting spot will be at the closest Walmart I can get to. Why? Because they have everything on my Zombie Preparation list. Later for scavenging. After I make it safely to my car, I am going pedal to the floor over to the convience store that has Everything. Now I thought hard about going to Lowe's and Home Depot...the nearest gun shops, etc... but I need to eat if I'm going to be burning massive calories, hauling ass and slaying zombies, so...Walmart sells food.
I'll also need the following supplies:
*Concrete, *Ply boards, * Propane, *Duct Tape, *Bike Helmet, *Chainsaw, * Nail Gun, *Bottled Water, * Car Battery, * Radio, * Computer, * Playing Cards, *Nyquil, * Lighter Wand, * Soap Powder, * Hair Spray, * Rope, * Heavy Jacket, * Several pairs of Pants, * Underwear, * Blow Torch, * Knife, *Super Soaker Gun, *Coffee, *Toothpaste, *Books, *Aspirin, *Antibiotics, *Gatorade, *Bleach, *Cigarettes, *Weed wacker, * Trash can, *Rain Boots, *Ramen and Hostess snack cakes.
Now providing that there is an army looking for survivors, I guarentee you that me and the other folk hanging out at the Walmart will be there for at least a month or two, holding out...It does depends on how many people there are in the store, but I swear, I am not the type that will knock someone off just because I want to preserve rations...really.