Riot Grrlz of the World...Unite and Take Over 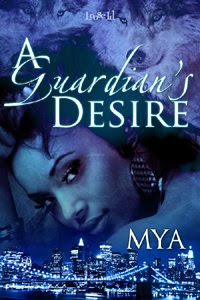 I remember seeing something about the decline in sales and the dissapointment in fans when a writer switches genres and pairings and while I will admit that I have a lot of M/M pieces out, its not for want of composing something with a rocking female in it. I'm not down with the spunky, plucky, or nubile. My females are bone jarring, hard living machines of enforcement. Anyway, I know folk like to speculate on reasons for writing an MF or an MM, but so that there's no speculations for me, I will say that when I write MM, its definitely more fantasy than when I write MF, that's a bit more close and intimate.
Freya, the heroine in my upcoming release "A Guardian's Desire," is a warrior through and through. She likes to think that she is tough as nails and that nothing can harm her. When she goes against a monstrous beast and almost dies however, she learns differently. By getting to know three, plucky young girls, she learns how to reveal her soft side. But it is her attraction to one gifted, gorgeous, submissive male named Rayne that leads her down the path of no return. For Rayne is a Beta were and what he has he must share with his Alpha, Fenris....who doesn't know the meaning of submit.
Yeah, I'm worried and excited to see how this book turns out. It's a werewolf menage with lots of action, monsters and sex, but I think it has a heart too. Most of all I want to give a fierce portral of a female in my work. Hoping to write more in the future, but they are hard for me.
Posted by Mya at 10:15 AM