Conflict as opposed to PWP 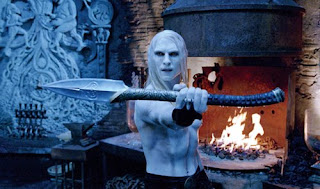 I just got back from seeing Hellboy 2 a day ago and while it was a great movie, it was great because of one person. Prince Nuada. Now, while I would looovvvee to write some serious (PWP-porn without plot) fanfic, regarding a beautiful, dark elf, I have a backlog of original fiction that needs to be tended to. Anyway, back to Nuada, I saw him for more than he was...well, just now I did. The man is conflicted, he is the epitome of angst and he is more beautiful (especially when practicing or executing deadly martial arts) because of his convictions. His angst gave the piece depth, purpose and engaged me emotionally. Something that I want to try for in my pieces.
Hell, If I were to use Prince Nuada as inspiration for building better conflict, instead of just hanging his photo on my computer for day dream purposes, I would be better off. You see, I have a love/hate thing going with conflict as in I'm not the best weaver of it. I loose myself to the intro, the attraction, and the mad sex of a work, but unless it's a quickie (25pages) most publishers want conflict in their writers work. The more I think about it, I know that I have gone up against the beast several times and when mentioned earlier, namely in the first few chapters or as a reason behind the main characters hook-up, it goes better, than the wrench in the works process. Currently, I'm working on a piece, where I can not wholly define what the climax is. It might be an internal revelation, it might be a battle royale, but when I tell myself that I can end this piece (already 21 chapters) in 3, I worry that I might not.... maybe I should have just planned it better. I don't really know what the problem is. You see, I write like a mad bastard, but I don't study the technics enough, I think. Sometimes I feel that I need to plot more, daydream less, wait for the muse less as my muse drinks and is occasionaly unreliable.
Still, I love to read and watch conflicts: about vendettas and backstabbing, doublecrossing and revenge. I read thrillers, they're my favorite genre. Yet, once I write, I always think, that my stories could use more, more explosion, a bigger sense of crisis... and then comes another humorous, interaction scene instead. One of these days I intend to do some of those 'conflict in prose' workshops but realizing that there is a problem, I hear is half the battle.