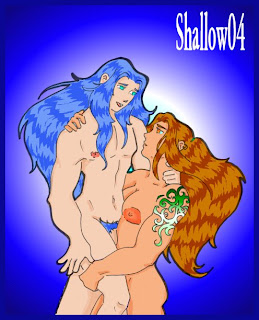 Well once you get past all of the hair, this is one of my favorite CGI creations (Shallow is my art psuedonym). I call it Happy and well it makes me thus because it touchs on the warrior woman attitude that I felt a great deal of growing up. I call my mom "Maximus."
With the release of my first female-centered novel, I wanted to tell the kind of story that I would like to read, about a female that is not dainty, not necessarily clever, and definitely not spunky. I wanted my character to be a brute force whose feminine side is manifested like a mountain.
As a writer of mainly M/M works, I often hint at strong women in the background, but it wasn't until the idea of Freya came to mind that I decided to write a story about a female.
While I am aware that most of my readers, probably won't touch the book because they prefer reading about the boys, I very much admit to all, that this was wholeheartily a beloved project to work on for me...and that there will be more warrioress stories, more man-handling of pretty boys and maybe even equally alpha men.
Actually, Happy is tied to a fantasy bunny about a villiage priest and the female battle instructor.
Weird? Maybe... but girlz rule!! Oh and if anyone has any referals for strong, big, dominant amazon women who man handle hot men, please drop me a note.
Posted by Mya at 3:16 PM