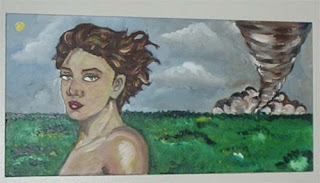 I did this painting which is called "Untitled," a while ago. It's on my wall and it's acrylic. I thought of it today after reading the comments regarding the "Purple Panties Lesbian Anthology" and the discrimination it is facing over at Smart Bitches. And while I don't have much to say on the subject, I will admit to the following. Women Rule!
I will also admit that I do NOT understand straight females who cringe and rant at reading straight fiction. Preferences are one thing, but shrieking and crying "Ewww," kinda baffles me. According to the poll I have on my website, around 36% of my readers probably won't be purchasing my new menage novel "A Guardian's Desire" in July and hell with 3 books that are exclusively M/M, I could see why folk might think that I write it exclusively. With my next 3 projects also being centered around the same pairing, it's not that I don't want to write more stories with female leads. I do. I just want to do it a certain way. Now yeah, my women may be a bit bossy, a bit mannish even, but for me doing a story about my sex, requires something more personal from me.
As a female, I am not fraile or petite. I am not spunky, plucky, nor do I swoon alot, and the kind of female I want to write is not either.
I had a close friend, one of my best, who was a lesbian and that I could take. When she told me she wanted to change genders however, that was something I could not. I could not call her, a he, and I could not call her anything but her chosen name. As a grrl, I just could not get over why she couldn't be proud to be female. We both were tomboys, I manhandled the boys and she manhandled the girls, and together we were amazons! I felt so betrayed. I figured that we had been through too much in learning to be women, for her to switch teams.
But then...it wasn't about me and my hangups.
Posted by Mya at 4:31 PM