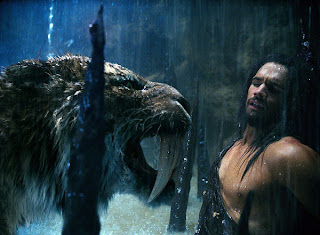 It's novella time!!! (WhhoooHoooo) I am currently at 23,000/50,000 words on my latest project "The Heart of Bast," and well it's kind of a relief to be working on something smaller for a change. I am trying to stick to my guns and wrap this story up, not going to try to blow it out of proportion at all. It is my ode to the Zoe-chick--aka-my cat, who is relaxing after a hearty meal of yellowfin tuna florentine and a bit of play with her new cat nip mouse.
Anyway, I was trying to figure out the best way to describe the story when I found this pic from the film 10,000 B.C. Sure the movie sucked balls historically, but it was beautiful to look at. This pic however describes the feel of my current project immensely though. Big cat bully!
In "The Heart of Bast" a werecat thief named Seth who likes pricey gems, fast cars and swank condos. He shuns his heritage but on the invite of a powerful boss, attempts to steal a prized artifact from the Basti, a werecat pride. The attempt is a horrible failure and his encounter with Crnswar, the Lord of the Basti is nothing short of life changing. Worse still, Seth soon discovers that while he thought to steal from the Basti, that they have instead stole something from him.
Okay, hookey blurb aside, this is a piece with a lot of claws, biting, blood and brooding...oh and hot werecat porn.
Posted by Mya at 1:57 PM

Labels: The Heart of Bast

From you that is an encouraging word :D

Ah, yes, 10,000 B.C did suck, but...this picture is way cool. Heart of Bast is an awesome name by the way. I agree with Amanda. It sounds really good, course I've read your other works so I know it will be. Can't wait.

Well, Sage...Um...you will be beta reading that one too, so if it sucks, I'm sure you will let me know :D ...Pluuuueessseee.