Life Outside of Writing 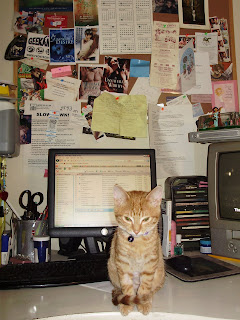 Just when you think you have everything planned out, things will go awry. I would have to say that I have been pretty much obsessed with writing at the expense of a social life and other obligations. This holiday season in particular I had big plans. Then, I adopted Cougar, a feisty, orange tabby. I will admit that my original motive was to have him as a companion cat for Zoe my calico, but again things never work out the way I plan. Zoe is highly jealous and somewhat moody about him and he prefers to stick underneath me.

Demanding little fellow that he is, and adorable, when he got ill and had to get surgery, I nearly had a nervous breakdown. I blamed myself for not watching him closer, for paying so much attention to the computer and for then some. I realize that kittens get into things but really it was a wake up call for me.

I don't have kids and so sometimes I tend to be obsessive and self concerned, but lil Cougar (about to be Big Cougar with as much as he eats) is my reminder that there are other things that I need to concern myself with, things that cannot be planned for and things that are important outside of contracts. While he is doing fine and healing nicely, I try to make sure that he and Zoe gets plenty of love, play and attention.

Sure novels need to be re-edited and submitted, a novel needs to be finished and promo items need to be sent out, but my kids need attention too and Cougar is good for letting me know when I need to take a break!
Posted by Mya at 5:31 AM