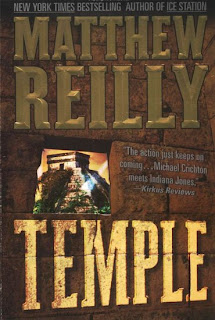 I'm a Reilly fan and I simple adore his formula, which is often as follows:

Well, my latest Reilly discovery, 'Temple' pretty much follows that formula. The bad ass action hero is named William Race and well...he's not really trained to do half of the shit that he does in this book. An every day joe turned Bond is how I describe him.

'Temple' is a tale within a tale and really I enjoyed the very Indiana Jones type feel of the novel. It is about a very special artifact which is not only the symbol of a tribe's spirit, it is potentially the means to destroy the planet. Yup, that Matt Reilly, gotta luv him. I think my biggest problem with the novel was how spectacular the main hero was. I mean moreso than the average joe hero in 'Contest,' William Race is just too damn lucky and gifted for me to even try to believe in.

Now Scarecrow or Black Knight....*cries* I wish for a new book everyday. Anyway, if you like tales of Incas, impossible odds, planet killer nukes, terrorists, intermilitary battles and more military hardware than you can shake a stick at... you'll like 'Temple.'

I've been reading Reilly for a while - probably because of the whole Aussie/NZ thing - and just like Cussler I love the stories because they are so over the top and utterly impossible. But that's what makes them so damn hard to put down!

I've been hanging out for something new from him for a while now.

You and me both. I love Reilly and am praying for a new over the top book in his Scarecrow series or I'll take another one with intergalactic death matches. Movies are too much to hope for, with all his special effects, but yeah, even though your disbelief is more than suspended, putting a book of his down is hard as hell.