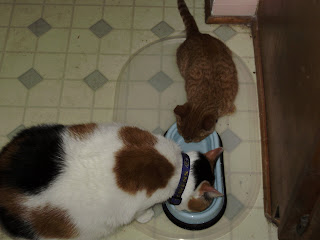 I have a new addition to the Den, an orange Tabby named Cougar. I adopted him as a companion for my beautiful calico, Zoe. To say that it took a long time for her to stop hissing and growling at him would be putting it mildly. Now she only swats at him when he bugs her to play when she is trying to nap. Out of all the photos I've taken of him and Zoe, this one is the most precious. Getting them to eat in the same place without attacking one another was a feat in itself. They don't really share a bowl, this was just the moment when I realized I didn't have to have Cougar's food bowl in my room anymore. They both eat in the same area now, and each has there own bowls filled with their own food. Now the big task is trying to get them NOT to eat out of the other's bowl. Cougar is the more voracious eater.
These two amuse me to no end and are heavily inspiring my werecat piece, but more than that, I am just happy that they are finally warming up to each other.
Posted by Mya at 6:21 PM

Yay!Cougar! Awwwe he is soooo cute.I was just watching Its Me or the Dog and while they are not the same species the dog trainer was talking about dominance and introducing an old pet with a new one, and I was just thinking Zoe was so territorial because its well... her domain and she thinks of you as hers too. It probably is good that Cougar is so young. If he were grown he'd probably be trying to establish his own dominance even more than he might as a kitten. But er...I digress from my earlier statement. He is SO cute. *pout* I want my Dachshund now. lol

Actually, the little boy is trying now to establish a claim. He calls himself stalking her and will nudge his way into her bowl if I don't stop him.

A Dachshund? Oh those are such cute dogs. You know I want to see pix when you get him :D