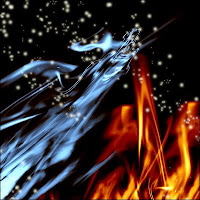 This weekend rocked in so many ways, the most important being that my muse sobered the hell up and really got busy. Not only did she give me the insight I needed to wrap up my current, monstrous novel, but she also gave me a more suitable title. Hawt Damn! Ok, so the novel formerly known as "Burned by the Sun" will hence forth be called "The Sorcery of Secrets." 3 cheers for the sibilant hiss. The muse seemed to think that the title should be a bit on the broad metaphor and metaphysical aspect, rather than focusing on just the heat aspect. In short, I wanted something that would focus on the many revelations that come to the main character rather than one specific point. I outlined (yeah, occasionaly I try) the last 3 chapters and lord willin' this puppy will be ready for launch.

At the moment the muse hasn't said anything about a sequel but then it is a part of a large universe and part of the story is untold deliberately. At nearly 300 pages, I didn't want to push the tale any broader than it already is. As it stands, I focus on only two types of sorcerers, fire and wind (In my sorcerer universe each has a specific element which they deal with). I can sorta see a sequel, focusing on different types, maybe a water sorcerer-- but I'm really not ready to put the cart before the horse.

Believe it or not, I actually have a set list and order of upcoming projects, now if I could just learn how to plot out a story, I might be able to produce things a bit faster and have to rely upon muse sobriety less.
Posted by Mya at 7:32 AM