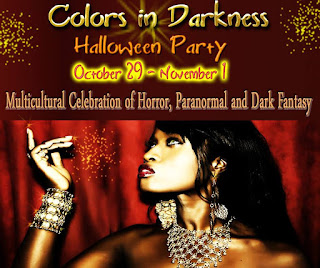 I'm waaaay late in talking about this but it has been on my mind to confess for some time. While I suck ass at promoting myself, I think I do a pretty good job of supporting my colleagues. I get enthusiastic about works that I enjoy and their creators and truly I am vibrant when I talk about their characters, plots and writing styles. I feel its my obligation to write reviews and give shoutouts where they are due. When folk ask me about my material, I tend to go into a catatonic state but ask me about what I just read and I can give an hour long speech. Suffice to say that I am an avid reader with a serious weakness for Horror, Dark Fantasy and Paranormal. (Woot- Guess who is just starting the SNAFU series? This chick) Okay, getting distracted by the awesomeness- anyway this past year I was so privilaged to be able to help in the creation of a Halloween party for diverse writers of...yup, Horror, Dark Fantasy and Paranormal!!


Now, I don't know about anybody else, but book fairs, book festivals, well communities of color don't tend to have a large speculative presence, if at all. Finding scary books (and no I am not talking about gangster lit although much of those are far more frightening than any slasher, monster or psychological thriller) is next to impossible. Seriously, I attended a book festival a while ago and I stopped in front of a stand with gorgeous flashy covers. The publishing representative in front of the booth asked me what types of books I was into. My but she was so cheerful as she went into what types of genres her company provided. Then I opened my mouth and said "Horror, Paranormal, Science fiction." Yeah that smile vanished quicker than a vampire at dawn.


So me and some friends, all of us speculative fiction writers decided to band together and plan an event focusing on AOC (Authors of Color) who wrote darker more fantastical works. Now before the event, I had encountered a few writers that fit the bill but once the announcement for the party went live, my short list blew up. I was introduced to a slew of writers and their works. Being able to bring them together was a challenge but so worth while as I saw that there really was an audience for diverse terror and spectacles! The party was a blast. Prizes were given out. Games were played. Interviews were displayed. Wanna see? Colors in Darkness


Okay, so not wanting the party to end, it was announced at the end of the festivities that there would be a Facebook group, called Colors in Darkness, to kind of keep the networking going, to reward those readers seeking something different and to provide a united front. Did I promote my work? Yeah but what really excited me the most was the joy of the other authors who participated and the multitude of new reads I got introduced to!


Often, and in the past I have to say that I...well I kinda felt self-conscious and secretive about the works I read and wrote, but being in similar company has ignited a flame within me. There will be a 2nd Annual Halloween party and even though its months off I'm still coming up with ideas! I want to create a newsletter, a promo brochure, do interviews and the like, but by networking I can see that others are doing their thing to spotlight the cause, such as the Black [African] Speculative Fiction Writers "Directory": Fantasy, Horror, Science Fiction, Paranormal Kindle Edition!.


Although I do get excited when I have a new release, the joy at seeing a community come together, emerge and grow is so much more fulfilling.