So I finally got to meet the notable erotica queen, Zane today. I always strive to learn something new when I go to see writers and today I got a vital message. To say that the woman is a powerhouse is putting it mildly. A writer, a screenwriter, publisher and entrepreneur, I was in awe as she stood before us detailing her many projects both past and future. I can still recall, back in the day, when her books were the hottest things smoking and visible in nearly half of the women’s hands who rode the metro in to work with me. To say that she became wildly successful from a spicy read in the days when erotica was barely ‘out there,’ isn’t even her greatest accomplishment. In the days before ’50 Shades of Gray’ Zane was tearing it up with the spice. I would be lying if I said that she didn't inspire me to write naughty, wild fic because she did. When I first started writing, I looked to her example for what I wanted to one day achieve. I still do.

But the remarkable thing about Zane is that she didn’t just sit back and write. She gave birth to and expanded an empire. She created a publishing company, edited and published over a hundred authors of not just erotica, but romance (gay and straight), non-fiction, she contracted with cable companies for the development of television shows and soon feature films. She has even branched out in sales of adult toys and herbal supplements all while performing charitable and uplifting deeds.

Every empire has its base and what I learned through Zane’s presentation was that if your base is strong then you can build upon it. She spoke about the underlying message of female empowerment in her body of work and I just sat there stunned as I tried to think of what message my body of work had and how I could use it to unite my readers. Zane is a brand unto herself and yes much of it derives from hard work but focus is just as important. Whether she is working on non-fiction with famous politicians, performing philanthropic work, serving as executive producer on her hot erotic cable show or just giving real talk to a room full of avid readers, I get the impression that she holds true to her message.

She has surely empowered me! And yes, I haven't figured out how to keep my eyes open for decent pics... 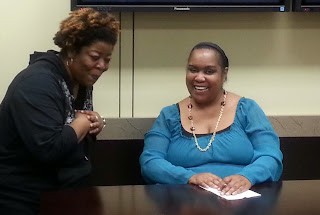 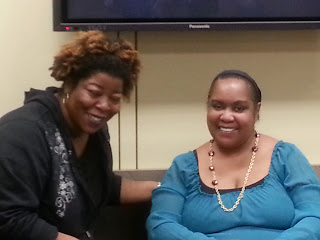