Con Report: Capclave and Pushing an Introvert to the Max

Capclave is a convention sponsored by the WSFA, Washington Science Fiction Association and it is within thirty minutes of where I live, depending on traffic. So taking into consideration proximity and theme, Capclave is always a tempting event. It is located in Gaithersburg, MD at the Hilton and is a three-day affair of science fiction, fantasy, some horror and a surprising amount of attention to YA. One thing, I have to say about this convention, is that the attendees are brilliant, smart, mature and laid back. You will see very few children, few cosplayers and the parties will not incur the wrath of the police. The panelists know what they're talking about, have been in the trenches of lit, from New York style to Independent. The history that they share regarding everything from the evolution of genres over the years, to publishing trends, to their incursions with literary giants is quite interesting to behold. All that was to say that I was not really surprised that this year's Guest of Honor was none other than George R.R. Martin. 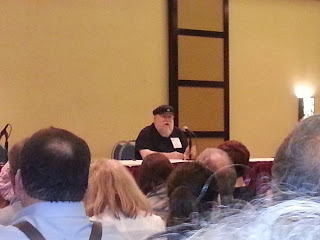 My mother finished the Song of Ice & Fire Series before I did, I must confess. While I kept up with the HBO series, I was a little late getting to the novels and so for the better part of this year, I have been reading his massive epic and loving it! So, tempted with the opportunity to meet the literary giant, I not only signed up to attend, I signed up to volunteer, which btw is the best way to attend any con in my book. You see, being a volunteer or staff affords you many opportunities to go behind the scenes, get advanced information and occasionally there are even a few perks! But, back to the convention.

This year, I was really feigning for author interaction. I was unable to attend a romance con that I had planned on going to and I haven't really found a writer's group that isn't just focused on getting published and critiques. So, I was eager to attend Capclave even if it was monsoon season and I had to drive through torrential rains to get there! And yes, it was all that I hoped it would be.

As a reader or a person who enjoys receiving a tale, sitting back and revealing in it, I have to point out that one of the highlights of the convention was listening to Mr. Martin read an excerpt from his upcoming project: Dangerous Women. The excerpt tied into the history of Westeros and the deadly dragon war of the House Targaryen. After he joked about all the projects he was late on as well as a few other topics, he began his reading and I swear to you, I was rapt, the entire audience was for nigh on an hour. He would end his tale by answering a question regarding the actors who were chosen for his audio books, but when I tell you, he is by far the better bard to tell the tales, I am not overly flattering the man.

As an introvert, I like to push myself socially, hence the volunteering, but it does in fact physically drain me. So throughout the multitude of panels I attended and my duty to guard the rear door and direct con-goers and guests to registration, I pushed it this weekend.

After the panel: When the Dark (Fiction) Comes Rising- Where Horror and Fantasy Collide, I walked right up to panelist, Craig Alan Loewen, a fascinating author who I had heard talk at Balticon and last year's Capclave and introduced myself. I got his card and we chatted about horror stories!! I met another author while I was standing guard at my post, who also loves and writes a darker shade of fic, Ms. Betsy A Riley. We had the most exhilarating discussion on dark fic and writing other genres. In the midst of working and controlling a line for Mr. Martin's Saturday reading, I lost her card...and panicked. After the Martin chaos ended, I had to recall which panel she told me that she would be in. And yes, I diligently waited until she got out, to request a new card. You see, she had lit a fire in me to dabble in more horror and I definitely needed to keep in contact with her.

While waiting for the panel: Aircraft Carriers in Space given by Chrisopher Weuve, I managed to accidentally discover another Neal Asher fan, and while I had been running low on energy reserves, I ramped up for an intense conversation concerning the awesomeness of my hands down favorite Sci Fi writer! Talking about massive A.I. starships, the science behind immortality and memcrystals, prattling on about Z.A.s (zero-asset) civilizations, I could barely catch my breath as I entered the panel...and then I really got blown away.

So, hearing from authors and panelists is cool, yeah, but getting schooled is totally awesome and Christopher, a naval and war games adviser, went into detail about not only aircraft carriers, naval history and ship components, he also brought to light flaws in several Sci Fi writers visions of space warfare. The most glaring distinction for me was Star Wars/Star Trek...I mean, in Star Trek the main vessels are capable of much more efficient destruction then fighter gnats of Star Wars. I am still more of a Star Wars fan, but the ineptitude of the Death Star against a one-manned small craft is kinda hilarious when put up against the Enterprise and a Romulan warbird neither of which even need to deploy individually manned fighters. And don't get me started on the runway launch discussions.

All that was to say, the educational sessions for writers, to help them avoid mistakes in the composition of their works and worlds, totally sold me into looking for more panels like his.

Throughout the convention, I had had several run-ins with the most fascinating lady. We conversed about the panels she was on, cats, her adopted first grade class and ways of learning and teaching. I swear, and it may have had something to do with my short-circuited brain, that I had no idea that she was the other Guest of Honor at the convention, one brilliant Sharyn November! No seriously, the ideas that she came up with for teaching kids haiku made me wishing that I had had such teachers in school.

Suffice to say that by the time I finally got to meet Mr. Martin and have him sign my copies of A Feast of Ice & Fire: The official Companion Cookbook and The Skin Trade, a WSFS exclusive publication about werewolves, I was a weary, maniacal mess in need of silence and rest. When I finally came before him, I couldn't even speak. All I could do was smile and you know what, he smiled back at the goofy chick with the afro! 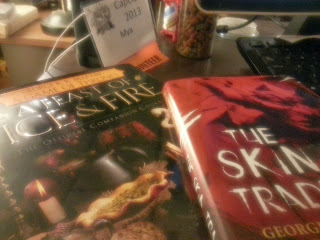 In summation, this year's Capclave was a wonderful experience and I would highly recommend it for those who like a mellower con. They had a fabulous and very well stocked con suite and an extensive selection of games for those who love a good game of Dominion, cough cough. The vendor's room isn't massive but it’s well stocked and the bar at the hotel was spacious and served a good burger and beer. I am sure I am leaving out a great deal, but I am still flying high from this exciting event and not quite grounded yet.

Next year's guests will be Paolo Bacigalupi, Holly Black and Genevieve Valentine and you never know who else might be there. Introvert or not, getting out and socializing can be challenging but at Capclave, even with a massive feature draw like Martin, it’s not excessively difficult. 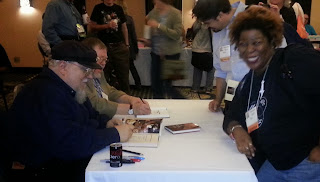 I really hope to be there next year, working on my social skills and volunteering and getting to social with all the writers of dark fantasy that I met. Believe it or not, there were more than a few there :D

Also glad you had a good time! And volunteering is a great way to see a convention.

Hope you return next year.