Publicity for the Shy or the New Conventions...Sorta

I will be the first to admit that I suck at publicity, a crucial skill in these days of publishing. I don't blog nearly enough, I look at Twitter as if it is an alien construct, I was certainly a bit too interested in Facebook's gaming apps and book signings- public appearances...well, lemme just say that I wasn't mentally prepared to sell myself, not sober at least. So, I was sorta in a rut and relying on the publisher of my latest work (whichever one it was at any given time) to do most of the work. Oh I rented a few ads here and there, and I did a few of the review sites and even a blog hop or two. And I might add that I did a couple of contests. Being crafty and a shopper by nature, I would make jewelry, swag and a gift basket or two with glee, but I wasn't really focused.

Turn the calendar to 2014 and that notorious time of resolutions. I came upon an 'Author Services' group on Facebook. Looking for ways to kick up the attention to my books and my brand (another subject entirely) I joined my first Facebook party hosted by a provider of author services, Chelsea Author Promotions. The party was unlike anything I had ever experienced. There were games, trivia, contests, prizes and interaction all in real time. The author got to present her work, excerpts, got to speak to new fans and interested but wary prize seekers. The host, Chelsea Author Promotions encouraged participants to note and like the author's Facebook page, Goodreads page, Twitter, Amazon and webpage. Much opportunity seemed to be had by both readers and writer.

Curious, I attended several more events and even won a key chain at one event. Well, I was sold then. I was already planning the party I would throw, the games I wanted to play and the swag I wanted to give away. Then, Chelsea, the owner announced that she was doing a Multi-Author Bash.

Although I didn't have a new release, the temptation to do some back list pimping and the low cost of participating en masse, drove me to sign up. I didn't know what I was getting into but for weeks I was nervous and giddy at the prospect of going on display. The event, a trial for Chelsea, in that she usually did single author events crept up in participants and attendees daily until it was 46 authors and nearly a thousand attendees!

So I worked on some trivia questions, thought about some prizes and prepared a gift basket based on the book I was promoting and prepared myself for the big day. Assigned to the second day of the event, I know that I was unprepared for flurry of activity that hit when the time came. In the span of a few hours, I had nearly a hundred new likes to my Facebook page, more than sixty new Twitter follows and a lot of Goodreads fans. My smart phone was jumping with notifications. But all of that aside, I was raptly following the interaction my games and questions were generating, so much so that I ended up posting an additional giveaway. Even after my day had ended, I was still getting interest and still flying high. 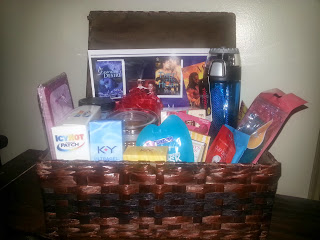 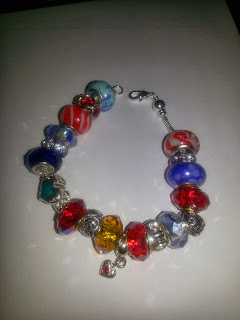 Prize Basket and Bracelet Swag I Created for Event

I paid it forward, participating in other authors' games, liking and following and fanning my heart out even as the rush turned a bit to the feeling an addict gets when they want another fix. Determined to finish my next WIP (work in progress) I couldn't stop thinking about the next event, when was it going to be and which book, old or new, I could showcase. I know a lot of writers who attend conventions and say that they come back invigorated and with swag, and seriously I got that feeling. I won an ebook, got to see lots of new work, purchase a few for immediate Kindle download and I got plenty of ideas and yes, I got to do it without being in a giant room full of people. With the exception of tracks, panels and a con suite or bar, the event was pretty much like a convention, an e-con! (Can I coin that phrase?)

Now a Facebook party may not be for everyone, but as someone who still barely understands blog hops and is confused by email loops, as someone too broke to attend a convention outside of the DMV, this is looking like a pretty good way for me to keep my New Year's Resolution of taking my writing career more seriously and trying to get more attention if not just for my books but for my brand! More on that obsession to follow...

Love your blog Mya..and really liked hearing about your work at the parties you attended:)