Fan Fiction: Not A Dirty Little Secret At All 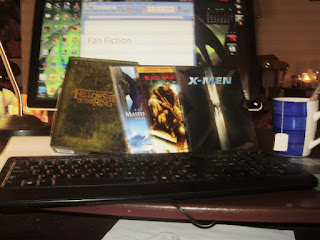 I will never forget the day when I discovered fan fiction. I say this as if it was crack cocaine and I should be standing in front of a group of survivors as I relate my story, but it’s true. I was a freshman in college at the time, and the first ‘Lord of the Rings’ film had been released. My best friend invited me to peer onto her laptop and low and behold, there was fic upon it. Now I don’t recall exactly what the story was about or who wrote it, but OMG did I fall hard for the premise.

You mean that the movie doesn’t have to end and that I can have back story, side story, future story and hundreds of versions of each. I’m going to halt the revelation there for a moment, because unlike some fan ficcers, I jumped right straight into hardcore slash. Assuming that some mildly tiptoe there way to hard stuff, I can tell you that it wasn’t long before my hard drive was bursting with files and files of fan fiction.

Mind you that I had been writing fiction since elementary school, but all it took was one short story done upon a dare, to start the fire in me. You see up until the point when I wrote my first LOTR (abbreviations abound) slash fiction, there was something so vital that I was missing and that the fan fiction community gave to me…Feedback!

With the exception of maybe two creative writing classes, which proved dull but mechanically constructive, my training in the literature consisted of studying the narratives of my favorite authors (a million and one styles) and a copy of the Chicago Manual of Style. I could write stories for miles, but with no critical and craving eye upon them, it was more of leisure time activity—nowhere near the obsession that it is today.

Yes in the world of fan fiction, not only did I get immediate comments and encouragement, but I also was turned on to the idea of the BETA reader. More on that later. Within the obsessive sugary arms of fandom, I not only cranked out LOTR fic, but HP, X-Men, Gladiator and Underworld to name a few. Initially, I started off co-writing with my friend Kia, then as the need to produce more set in, I started working independently. I wrote short stories, novellas and later novels. I posted them on LiveJournal and various fandom-centered websites and waited joyously for the comments to flow in.

Let me tell you that when you already have the meat available (i.e. World, Characters, Basic Plot) that composing a tale with a few diversions is a damn good exercise for a wannabe writer. I liken it to one having a coloring book. The outline is already in place, it all in how you color in the lines. You can also use any color crayons you want. The basics are recognizable however you can be as creative as you want.

No more did I have to wait for the next episode, daydream about whatifs, for nearly every show I loved and several movies, I could either search for it online or get to typing. Afterwards, I would have the story beta-read and published online for other addicts. Ahh…memories…I spent quite awhile in world of fandom, (I spend a lot of time in other worlds, Warcraft for example) but eventually my muse got fed up and demanded its own sandbox. Secretly, I began writing *gasp* Orginal Fic. I don’t know whether I’ve mentioned this before but unlike the fanfic, writing original works about characters not known by millions didn’t get quite as much attention. And I was not ready to give that up. The fandom community is a dragon, fierce, strong, protective of its gold and dangerous when ticked off. I loved being a part of the politics, participating in the contests, chatting with other fan fic writers and oh the dishing we did on the actors, writers and storylines of the films and television shows we wrote about.

It was not easy to leave such intensity behind, to kick the habit per se, and oddly enough I was at a convention [Con.txt] when the wake-up call really came. You see there were professional writers at the convention who also (some secretly) wrote fan fic. There were real editors there as well. There were attorneys, housewives, teachers…but I’m straying. It was while bouncing an idea of mine off of another writer that I got the encouragement to submit my original fic to a publishing house and so began that chapter of my life.

Now, even though I have published over seven titles, I still revere and miss the world of fan fiction. Why I imposed my personal ban on writing fan fiction had nothing to do with any failings or politics involved in the community. There are some truly outstanding writers and epic manuscripts coming out of the Fan Fic community…in the end it just came down to me wanted to develop my own source material, but I make no bones about my love and adoration for fan fic writers.

Do I miss it? Hell yeah. Do I read it still…BannerXStark (Please, send me reccs)