I always figured that if I had children then surely they would be geeks, and not just because of my massive B-movie monster film collection, my Godzilla action figures, sci-fi tomes or even the themes of my part-time job of providing content for The Den, but because my kid would see Mom geeking out all the time and would want to participate. As in, “Mom, can I try World of Warcraft? You’ve been playing all day,” or “Look Mom, I painted your model of King Ghidorah?” Alas, this year at Balticon, a Sci Fi/Fantasy and More convention, with so many friends bringing their Geeklings in training and so many older and even elderly Grand Geeks, it dawned on me how well developed Balticon is. There is something for ever sort of geek: Anime, Film, Music, Literature, Crafting, Gaming, Science and even a Children’s Programming. Even the guys at Endlight Entertainment were back with their Ninjas Versus Series. With such a broad range of fields, I’m sure that it would be a wonderful learning and socializing opportunity for children, elder’s and even nongeeks alike!

Taking place in Hunt Valley, MD up in Baltimore, Baltimore nowhere near as crowded as it should be. You won’t often find yourself suffering from claustrophobia, however seating in some of the small panel rooms can get a bit tight but only because the rooms themselves aren’t that big. It’s located close to a wonderful shopping center where food, toiletries, liquor and even a movie theater are readily available. A side trip to the Baltimore Harbor and Aquarium are easily possible. And last but certainly not least, you never know who you may be rubbing elbows with and what they may be able to teach.

This year, I attended quite a few panels on Writing and Reading specifically. Many were good and gave me several recommendations of titles and works to purchase or research, such as “The Sandkings” a short story by George R.R. Martin (who I shall see at Capclave I vow) and “Germline” by T.C. McCarthy who was generous enough to pass out free copies of his books to panel attendees. The panel on “How military Technology is Catching Up with Military SF Tech,” blew me away as I wished it was both longer and I found myself yearning to ask more than a million questions, while jotting down names such as Myke Cole, Bill Fawcett and Charles Edward Gannon. The panel on “Sex in Traditional Fantasy,” was highly insightful in distinguishing the line between the erotica that I write, the more developed fantasy that I want to write and the how both are viewed. Interestingly enough, Ms. Barbara Friend ish was there, of Mercury Retrograde Press who I had met before at a talk hosted by the Library of Congress. Listening to experts and writers is always a joy of mine as I jot down notes and search for ways to improve.

However, of all the events I attended, it was one based on the writing craft that stole the show for me this year, not because I never attend craft courses because I do, but this one resonated with me because truly it was worth the entire admission and stay at Balticon. Taught by the charismatic author Maria V. Snyder, whom I had never even heard of, the class “Poisons and Purple Cows” not only blew me away but encouraged me to buy two copies of her book “Poison Study,” and have them signed! Did I mention that I had never heard of her before and that I usually research things before purchasing? Mrs. Snyder is a mentor with the Masters in Creative Literature Program at Seton Hill (the college I attended before UMD) and getting not one but two free courses in writing was worth the registration fee for Balticon and then some!

Attending panels and talks, book launches and parties at Balticon is one thing, however there was another aspect of convention going that left me jazzed as well: Social Networking! While taking a break between panels, I met the daughter of the owner of Night Shade Industries. Bonding over drink and cigarettes I got several recommendations and ideas during the short span of time that we talked. She hooked me up with not only her kool-as-hell mom, Rose who I shall commission to make this: 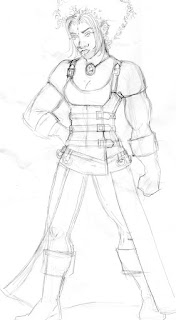 But they also hooked me up with a superb recommendation (and sampling) of mead, called Bunratty Mead, available for import at a select store in Annapolis.

While there were tons of fun, interesting tidbits and people that I met, unfortunately my addled brain can't recall it all. Will I be at Balticon next year. Surely. Will I see you there? Let me know.