Oh yeah...It was for a great cause too!! 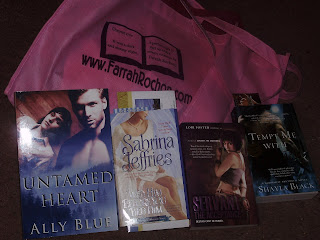 So after work today, I got on the red line and headed downtown to attend the "Readers for Life" Literacy Signing sponsored by RWA. As the mighty romance convention is this week and being held in Washington, D.C., I decided to head on down and see the sights. Boy, did I feel like the intimidated wall-flower. With sci-fi novel in hand, I stood in line for almost an hour before being released into a veritable den of authors, for the mass charity signing. To say it was overwhelming would be an understatement. Over a hundred authors were there and after grabbing the two signed books I specifically came to get, I ran into two other must have reads. God, but I would have loved to stop by every table. As it was, I got to chat with Ally Blue and Shayla Black, two authors with e-publishing chops and Lori Foster, whose convention I would love to attend. Sabrina Jeffries also gave me a wonderful autograph for my friend at work! The authors were there in force with goodies and it really made me excited and determined to one day join their ranks...in the meantime, I have a lot to read :D
Posted by Mya at 5:30 PM