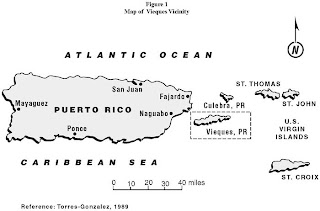 My third trip to the beautiful island of Vieques, Puerto Rico was an adventurous one. Fine Dining and beautiful beaches, I knew what to expect; the bounty of free roaming wildlife such as horses, roosters, geckos, etc. I knew that I would have a wonderful time with my best friend who has relocated to live on the island...but what I didn't know was that another visitor would attempt to show up to the island. His name, of course was OMAR. 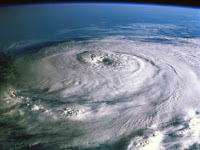 Destined to hit Vieques head on, it struck dread in me. Besides watching the Weather Channel like it was the SuperBowl, I got a glimpse of what Hurricane prepardness means. It's always rather intriging to watch disasters on television, but breaking out the generator, the hurricane shutters, checking the cisterne, making sure adequate food, water, beer and charcoal are in stock, clearing the yard of loose possible projectiles, was a whole other ball of wax.

Now H. Omar just barely slipped past the island at the 11th hour, but when I went to sleep, I was prepared to wake up surrounded by water. Vieques is not a big island and with a lot of concrete structures it wouldn't have totally been annihilated, but water, electric, mudslides and property damage will have still been an issue...Hell, they take all of the small planes from the airport in preparation and no way are the ferrys going to be in port before a hurricane.

I did not think that I was going to be home today, but thanks to the carribean sea winds, I got away with no problemo.

Now, Vieques is a quaint island, nowhere as fast and modern as San Juan, but absolutely gorgeous and perfect for some one who wants to relax, admire horses herding upon the beach. It is home of the Bio Bay, a bioluminescient bay where if you swim at night the little micro-organisms glow around you. (They are harmless) It is a place where you can eat gormet meals as well as local fare for reasonable pricing and drink well into the night with friendly faces around. Most of all though, it is a place to chill and despite the excitement of the hurricane, I did just that putting on more than a few pounds to boot. Fine dining, I had such great conch fritters, swordfish, chirascuro, pasta, chowder...Several of my favorite eateries, such as Tradewinds are located on the malecon (like a boardwalk), that overlooks the sea, but there are other restaurants peppering the island that are just as delightful such as Coqui Fire (who make exquisite hot sauces).

Again, it is a gorgeous island and I plan on returning soon, but for the uninnitiated, it is defintitly a place you need a guidebook and a guide for. And be careful of hurricane season.
Posted by Mya at 11:09 AM

Glad to hear you made it back okay. For the record I hate, hate, hate hurricanes. But who doesn't, right? Every time lightning cracks across the sky the entire neighborhood (where my grandmother lives) locks down tighter than a miser's purse strings. So when a hurricane is set to come to NC its nothing but a friggin' headache. Be glad to make it back to CT. Sure, it's cold up there but at least we don't get the 'canes. Oh, and I noticed you slipped in 'beer' for your essentials. hehe

Oh you know I had to have something to calm the nerves, especially once they broke out the generator and the hurricane boards to seal up the windows...Glad to hear from you and soon...soon you'll be done :D